The importance of dental crowns in modern dentistry is immense, because without them we would only be able to treat and repair teeth, or to cosmetically touch them up, without restoring any functions to missing teeth gaps and highly worn teeth. Owing to dental crowns, today we can reconstruct each and every tooth and restore its perfect condition, and we can combine crowns with implants to even rehabilitate the completely toothless patients, or when they are on the threshold of becoming ones.

A crown replaces the outer portion of a tooth, the one that is visible and is used to chew food. If teeth are worn but of sound health, their core remains intact and will serve as the support for artificial crowns glued by cement to form a new tooth, much like the natural substance which used to have that function. If a tooth is missing, an implant, which replaces the root, will assume the role of a foundation for the crown, and the abutment, which is placed on the implant, will be directly joined with the crown. 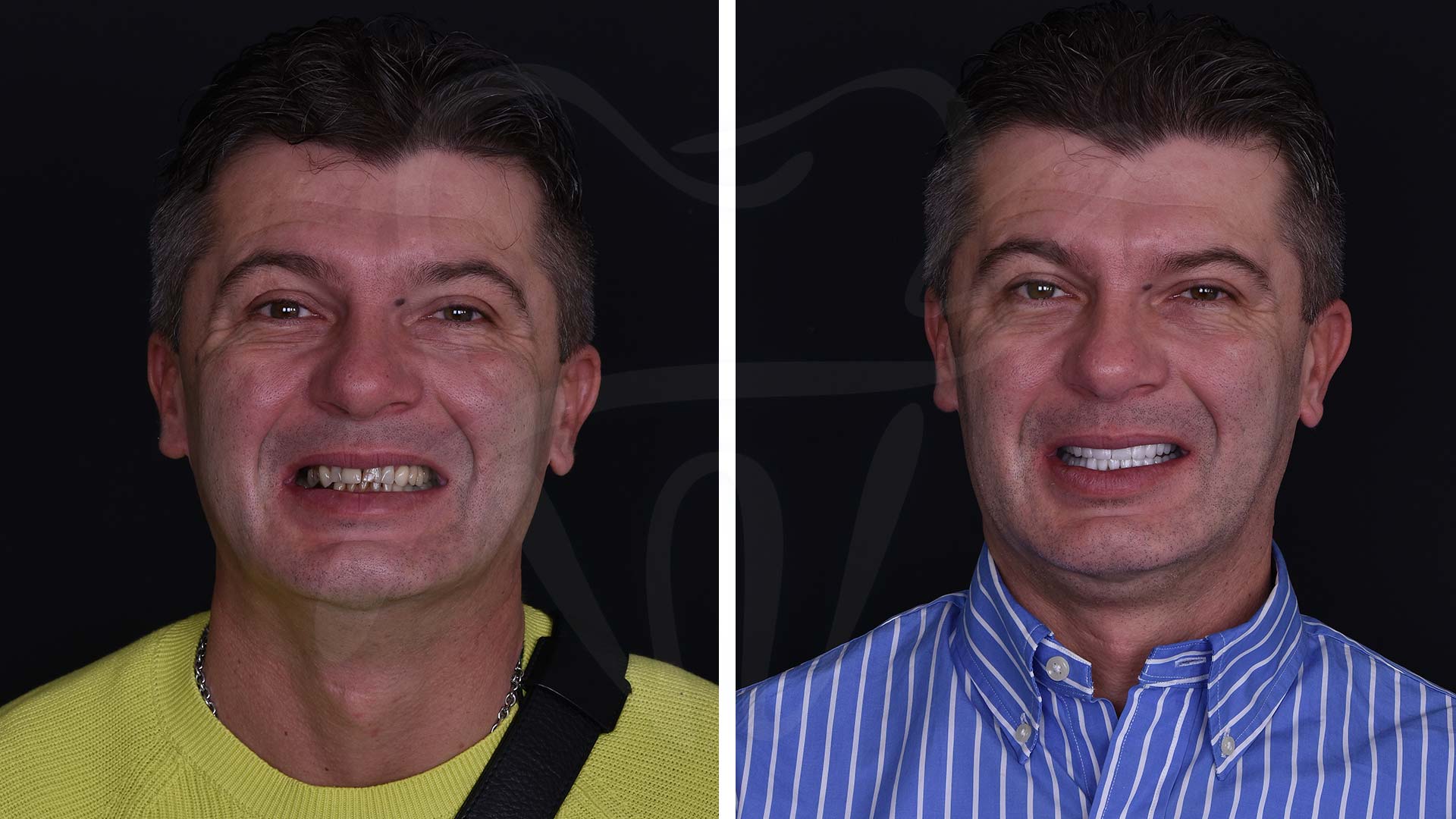 A crown may be quite thin and placed over a tooth which has its substance preserved but is less presentable than its neighbours, in order to regain uniformity of a smile, or it can be placed over a small area of a healthy tooth which is missing substance. As for implants, the procedure is planned according to the number of missing teeth. If only one tooth is gone, it involves using one implant, one abutment and one crown, whereas multiple missing teeth may be replaced by, for example, only two implants on which we will later attach three or even four crowns, similar to two teeth which can support a three- or four-piece bridge.

For all the mentioned reasons, there are numerous different situations where a patient may need crowns. We normally apply make use of them in implant procedures and in complete smile restorations based on worn, but mostly healthy teeth. Patients who pay more attention to their teeth and are somewhat younger will commonly cover with a crown one tooth with substantial cavities due to decay, because more significant deficiencies cannot be replaced by fillings in such a way as to restore a long lasting functionality. However, the use of individual crowns is much rarer, because in our country people frequently postpone this sort of intervention due to hesitation rather than financial reasons. 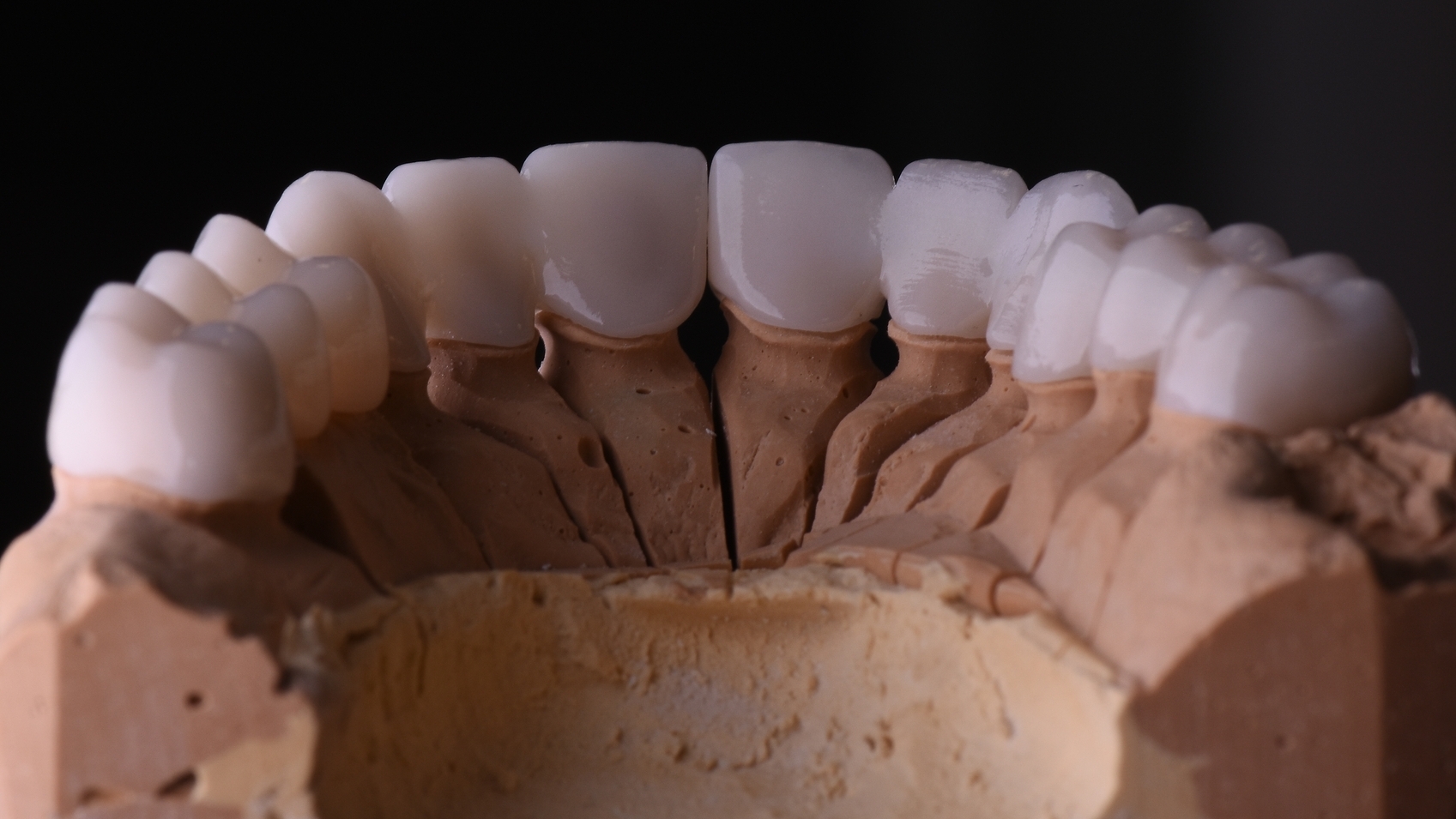 Sample crowns on a fork model

In a great number of cases both the patient and the doctor are presented with a dilemma – should a worn tooth which does not have healthy teeth adjacent be extracted and a new implant placed, or should we save it and mount it with a crown. An implant procedure requires additional time and money, but on the other hand, placing a crown on a compromised tooth which is not completely stable might not be a good idea in the long run, since this may in turn waste everybody’s time, money and effort. In these types of situations the most important thing is that the patient and the doctor decide together what the best course of action, all things considered, is, and one solution will emerge as optimal, especially when all the other options are considered against it. 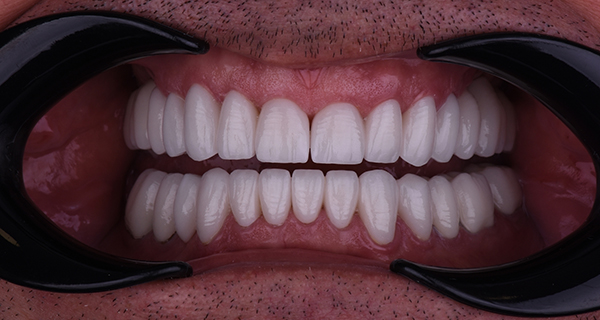 Frequently, crowns are combined with veneers or bridges, depending on whether it’s an esthetic or a restorative procedure, respectively. In either case, the crowns will blend in nicely with the adjacent veneers or bridges. However, when a crown is placed within an otherwise natural row of teeth, the blending will be perfect only if a patient has completely sound and naturally white neighbouring teeth. If not, some colour discrepancy might take place, which does not have to be a problem, since crowns are regularly placed on side teeth which are less visible. If a crown is in a visible area, however, the colour difference can be reduced to minimum with good hygiene and calculus removal, or by teeth whitening if needed.